The same but different!

People worry they'll have to learn to cook again - don't!

A couple of techniques to slightly alter but there's nothing to be afraid of, in fact most things are easier and you'll get better results than an ordinary oven.

Alter the oven you use instead of the temperature dial.

AGAs have two, three, four or five ovens and they're all at different temperatures (see below for how the AGA works to learn why). Conventional cookers use one oven and change the temperature, with the AGA just use the oven that's at the temperature you need. Cooking times don't change.

The AGA is a 'heat storage' cooker so it's best to use the ovens as much as possible - retaining heat and using less energy than open hob cooking.


You'll be surprised at just how much you can do in the oven instead of on the hob.

With a couple of small changes your cooking is transformed - great results every time!

Read on for a more detailed explanation.

When cooking was done over an open fire there wasn't much you could do to alter the heat other than move things further away. Heat was quickly lost if you didn't keep up with the fire and feeding the household was a hard, messy job.


Fortunately we've come a long way since then!


The 'kitchen range' came along with its side-oven allowing baking and a little control over temperatures - but still an open fire with very poor efficiency and the control you did have was limited and very labour-intense. (And a kitchen range was still a rather exclusive item.)


Improving on the open-fire heated range the AGA was born. Invented by Dr Gustav Dalen, a Nobel-prize winning scientist who decided that enclosing the fire would be safer (he'd lost his sight in an experiment), more controllable and more efficient.


He was right - less fuel was needed and there was much more control over the temperature of the cooker.

The 'Traditional' AGA uses heat from a single source (keeping things simple: one burner, one flue, one set of workings and controls) to heat the hotplates and ovens to different temperatures using cleverly designed flue/ducting and cast-iron conduction plates which ensure the correct temperatures are maintained throughout.


(Incidentally - we now refer to all these 'single heat-source' models as 'Traditional AGAs'. The New Generation AGAs have separate controls for hotplates and ovens but the fixed temperature principle is the same.)


You then have ovens and hotplates with different cooking temperatures - always ready to roast, bake, simmer or boil, anytime of day or night with the bonus of a gentle warmth emitted to the room from the hard-wearing vitreous enamel top and front of the cooker.

How does this affect cooking?

Well, rather than use the same oven but change its temperature setting (as you would on a conventional gas or electric oven), you just use the oven which is already at the correct heat: want to roast? Use the top (hottest) oven, bake? Use the more moderate oven and for simmering use the bottom oven. 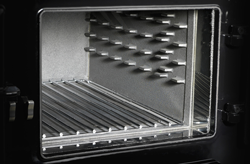 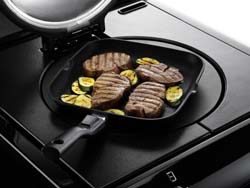 Quick cooking with a high heat - steak on the AGA hotplate.


Again the 'fixed temperature' principle applies - there's a boiling plate for intense cooking and starting things off, and simmering plate for slower or more moderate cooking.

To alter the temperature: instead of turning a burner or zone up or down as you do on a conventional hob you just move the pan so there's less contact with the hotplate - it's as easy as that.

Conventional hob/oven cooking often results in 80 percent of the cooking being done on the hob, and 20 percent in the oven. In an AGA this is generally reversed.

Most things that would simmer on a hob or cook for a long time (generally longer than 10-15 minutes) can be cooked in the AGA's bottom (or 'Simmering') oven: rice, root vegetables, risotto, porridge and many other dishes can be done this way using its gentle heat.

It doesn't matter with the AGA - you're cooking using the radiant heat from the cast iron.
There's no exposed flame in the oven so the type of heat is the same in all AGAs - solid fuel, gas, oil, electic, 'Traditional' or 'New Generation' - they're all the same.


How are they different?

It's the controls that are different - depending on which you have you can control the ovens and hotplates individually, or run the cooker in an ultra-low heat mode (much less heat to the room for summer and very low running costs).

Is the Cooking Different?

These New Generation models have separate controls for the hotplates and ovens but use AGA's famous cast-iron ovens and hotplates so they cook in just the same way as all heat-storage AGAs have - with radiant heat to seal in flavour.


This means the cooking principles and styles (constant temperatures and oven-cooking) remain the same.

The entire cooker is an outstandingly efficient energy store, steadily transferring the heat from its heat-source to the ovens and hotplates.

The different ovens and hotplates are heated to different (fixed) temperatures; so instead of turning one oven up or down to suit a recipe's requirements you just use the oven that's already at the correct heat, simple!

That (and using the ovens in preference to the hotplates as much as possible) really is the main difference to cooking on an AGA than on a 'normal' hob and oven combination; it's certainly not a case of learning to cook all over again!

Heat is transferred into the cast iron ovens and released evenly from all the inner surfaces. This is an altogether gentler process than the fierce direct heat from the elements or flames in most ovens and is the reason why AGA cooking preserves more of your food's moisture, flavour, texture and goodness.

It's why 'AGA people' refer to the ovens by what they're used for - 'roasting', 'baking', 'simmering' and 'plate-warming'.

In a two oven AGA the top oven shares the duties of baking and roasting and the bottom oven is used for simmering, slow-cooking and keeping food or plates warm. 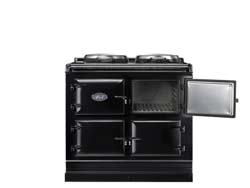 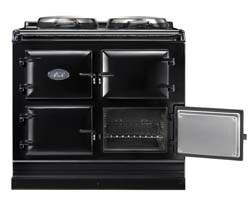 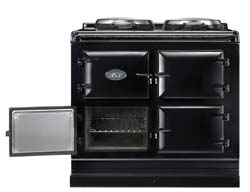 A four oven also has a warming oven designed to keep food piping hot without drying it out, and to warm plates and serving dishes.

The five oven AGA (Dual or Total Control only) is a combination of the three oven with a roasting, baking and simmering ovens and the additional two ovens from the four oven AGA's 'hotcupboard': a slow-cooking/simmering oven at the top and plate warming oven below.

Moving to the top of the cooker there's boiling (left) and simmering (right) plates beneath the distinctive insulating lids. (The AGA 60 and AGA 3 Series have one hotplate that can be set to either simmering temperature [heats up from cold in 12 minutes] or boiling temperature [an extra 3 mins, 15 mins in total] and there's a durable outer so pans can be slid to one side, reducing contact with the hotplate and reducing heat to the pan.) 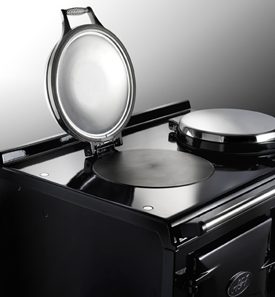 The four and five oven AGAs also come as standard with a large warming plate on top of the 'hotcupboard', it's ideal for keeping food warm before it's served, or simply to keep the coffee pot warm during the day. (As an option the warming plate can be specified as a two-zone gas or electric-ceramic hob on four oven models, or a single-zone induction hob
on five oven models.) 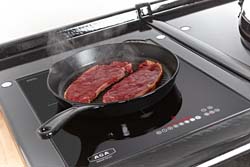 The Integrated Module, which can be added to the left side of any heat-storage AGA provides extra capacity if you do turn the main AGA off in summer, or if you just need a bit more space when family and friends call round at short notice. The top oven is a slow-cooking (90-120C) oven or can be used as a grill and the lower oven is an electric fan oven. The four-zone hob on top can be either mains or propane gas, or electric-ceramic.

Simmering: gently does it

The simmering plate provides a gentle heat for warming milk or bringing custards and sauces to velvety perfection. It's a natural griddle, use your bake-o-glide (a re-usable teflon sheet) for drop scones and blinis. Plus, it's the home of the famous 'AGA eggs' - zero fat fried eggs with the classic transparent white top and perfect runny yolk.
You also have the simmering oven that plays such an important role in AGA cooking. Start your casserole on the boiling plate then transfer to the simmering oven for the most tender slow cooking you've ever tasted. Steam root vegetables (see below). The simmering oven also cooks beautifully in its own right: AGA creme caramel and similar delicate dishes are unsurpassed.

The boiling plate on an AGA can boil water as quickly as most electric kettles, you can use it to bring veg quickly to the boil, create fast stir fries and, using the AGA toaster, the famous AGA toast that's crisp on the outside and blissfully soft within.

Heat is released in the oven cavity evenly and constantly using the time-honoured 'hot top, cooler base' heat zones, just as in those wonderful old baker's brick ovens. This is why the mere aroma of bread, pastries and cakes emerging from an AGA is usually enough to fill your kitchen with appreciative faces. Classic roasts are another AGA hallmark, the outside dark and crisp, the inside succulently moist. Not that an AGA is only for serious food of course, it's equally adept at perfect pizza and oven chips. Or in the morning there is nothing better than cooking sizzling sausages and bacon in the top of the oven for breakfast.

Prepare your veg and bring to the boil in your pan of water as you would normally.

Boil for a minute or two then at the point where you'd normally turn the pan down to simmer, drain all the water from the pan, put the lid on and transfer to the simmering oven.

The veg will steam in the residual moisture, retaining colour, flavour and nutrients. Plus, it doesn't go mushy anywhere near as quickly as it would if left simmering in the water.

Remember to adjust your timings though - you need to double the remaining cooking time when steaming so if you used to boil then simmer in water for 10 minutes, you need to boil, drain, transfer to the simmering oven and steam for 20 minutes.