Best known and still the mainstay of the AGA brand is the original cast iron heat-storage range cooker.


The AGA 3 Series and AGA 7 Series cookers with many configuration and sizing options are the mainstay of the AGA Heat Storage range. Fuelled by more environmentally friendly electricity they are more economic to run and easier to install than the old oil and gas models which were discontinued as of January 2022.


You can also grow the capacity and flexibility of your AGA by adding an 'Integrated Module' (7 Series models) or extra fan oven and simmering plate section (3 Series models) too.


Sizes from 90cm to 170cm in both lines, and options such as an additional fan oven and induction hob.


eR3 Series models have individually controlled ovens and hotplates and use a (standard) 32amp cooker circuit (some options require one or two additional 13amp sockets as well) for quick heat-up times in case you decide to turn an oven off.

They have two cast-iron AGA ovens and a dual-temperature hotplate, plus the fan oven and induction hob options.


R3 Series models also have individually controlled ovens and hotplates but have longer heat-up times (they're really meant to be left on most of the time) as they use two or three lower powered 13amp connections (not plug-sockets though). These (especially the 100cm models) are ideal to replace an old Traditional AGA when the time comes for it to be retired.


Low running costs, and adaptable settings - there's even an induction hob option for the ultimate flexibility. 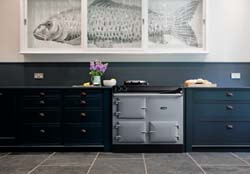 Now you can have an AGA Heat Storage Cooker to fit in a 'Standard' 60cm cooker space.

Available with either traditional electric hot-plate or a four-burner gas hob, the AGA 60 has two cast-iron heat-storage ovens. It gently warms the room (there's a low-heat setting for summer) and cooks just like all other heat-storage AGAs - now everyone can benefit from radiant-heat cooking! 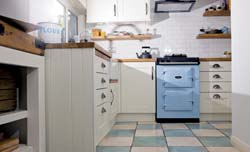 Modern buildings are insulated to a higher level so don't need as much heating as older ones.

This is why AGA now make most of their heat storage cookers available with a programmable system which allows the cooker to be reduced in temperature when it's not in use.

This means you can still have your heat-storage AGA with the unique cast iron ovens and the legendary cooking performance but with a reduced warmth to the room and much lower running costs than before too.

How to buy your AGA