The Dual Control AGA, part of the 'Control Series' line-up (formerly known as 'New Generation') which are more economic, and more controllable than the Classic 'Traditional' models.
The all-electric versions have now been superseded by the AGA 7 Series R7 model (the gas-electric model remains in the current line-up as there are no plans for a gas-electric R7).

As the name suggests - there are two controls (compared to the 'traditional' AGA's single control); one for the ovens (which work together and are normally on all the time, like a traditional AGA) and another for the hotplates which are normally off and are turned on when you need them.


This gives the Dual Control AGA the flexibility to reduce the heat-output to the room (and its running costs) whilst still retaining the gentle 'AGA warmth' and simple useability of the classic / tradtitional models.

(The hot-plates are electric on all models)

(Instead of the warming plate on the five oven AGA's hotcupboard.)

One element maintains the heat in the ovens.


The all-electric model doesn't need a flue and is available with either in-room oven venting, or external oven venting (which has a 28mm copper pipe running from the cooker to a small fan box mounted externally).

The gas burner maintains the heat in the ovens


Available with either a 'conventional' flue (using a chimney), or horizontal 'power flue' (54mm diameter pipe runs at knee-height up to 4m in length to outside) if there's no chimney. 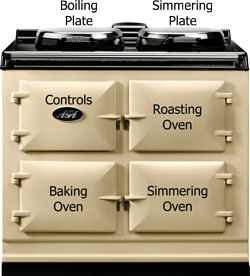 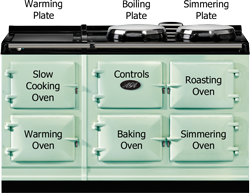 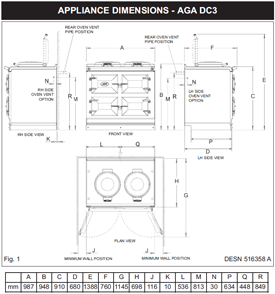 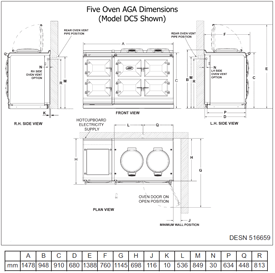 The Dual Control AGA doesn't need a plinth - it is 910mm high (to the hot-plate), which is just right for a standard kitchen worktop height of 900-910mm.

Needs both an electric and a gas supply.

- A 3kW gas supply (generally a 15mm pipe is fine but may need to be bigger if it's running a long distance).

- An additional 13amp socket for the hotcupboard to plug in to. **Socket MUST be to the left side**

The gas Dual Control AGA vents its ovens through the flue.

Which is designed to have an extractor above the cooker.

With a 28mm copper pipe running to the externally mounted fan box. 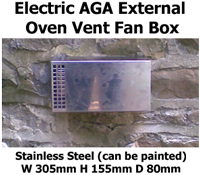 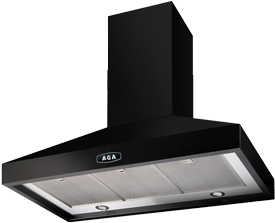 Two controls, on the same AGA?
Yes and it works brilliantly!

One dial controls the (three) cast-iron ovens, selecting between:
- 'Off'
- 'Three-quarters'
- 'Normal' temperature
(and whether or not the oven ventilation fan is on or off for externally vented all-electric models). 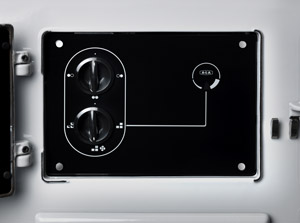 The ovens are designed to be left on all the time. Gas-electric models have a thermostat which allows varied settings. The all-electric model has two settings: 'Three-quarters' or 'Normal' and can be switched between the two. (For all models it takes about 8 hours to heat the ovens from cold and about one and a half hours to go from 'Three-quarters' to 'Normal'.)

'Normal' temperature in the top of the top oven is about 240 degrees celsius and 'Three-quarters' is about 200 C (since they're all heated from one source the other ovens are approximately 20% lower too).

As you can imagine, with the oven at 200C at the 'Three-quarter' setting you can still cook many things, just allow a little longer than you would have done with the ovens at 'Normal'.

We often leave the ovens at 'Three-quarters' and bake biscuits, flapjacks, cakes and tray-bakes on a low shelf in the roasting oven - works a treat (and if you've called in on a Saturday morning you may have tasted the results!) 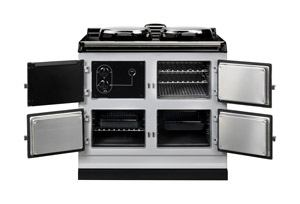 The Dual Control AGA is not available with an internal hot water boiler.